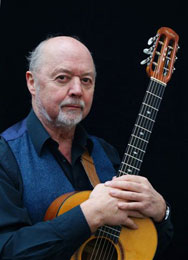 We all dream of it don't we? Travelling the world, seeing different places. And what's better than doing something you love in different countries across the globe?

This is a reality for one of our long term customers, Hector Gilchrist of Frimley in Surrey, UK.

Hector is bound for Japan during the summer of this year for various concert engagements. A long-established performer on the folk seen, he has also appeared throughout the British Isles, Ireland and beyond!

Born in the historic county of Ayrshire, South-West Scotland, he has been involved in folk music since the early days of ‘The Revival’.

Hector's vocal style and delivery make for relaxed listening, bringing a strong emotional element which holds the listener and conveys the depth of feeling in the storyline and melody. His repertoire contains songs traditional and contemporary, sung in his sensitive lyrical style usually with uncomplicated guitar accompaniment.

We wish you well with your exciting trip Hector and hope you enjoy your time in Japan!